So my wife and I saw Mad Max: Fury Road, and it was greatness. It’s the only movie to date we have actually seen twice in the theater, since we both went home after the first time and couldn’t get it out of our heads. When Jenny announced, “We need to see that again,” I was totally on board. You can go elsewhere to read about peaens to the stunts, the cinematography, the raw propulsive quality, the worldbuilding, the clear stakes and great character arcs in spite of minimal dialogue, the egalitarian treatment of female characters, and you should—there’s lots of interesting stuff. I, however, am here to talk about the Doof Warrior. 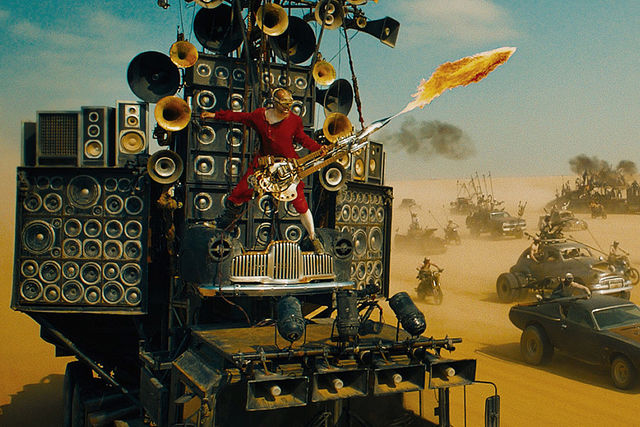 The Doof Warrior is the dude in the red pajamas, slinging a flamethrowing guitar and hanging from bungee cords in front of a giant wall of speakers that is (of course) mounted on a truck. He gets less than sixty seconds of total screen time in the movie, but he made me laugh with pure, unbridled joy every damn time he showed up. (I want to stress that this was serious happiness laughter, not even distantly related to any kind of mockery.) Jenny wanted to know what my deal was with that, so here it is.

In Frank Zappa’s autobiography, he talks about a concept called “putting the eyebrows on.” This was when his band was rehearsing a song, and they’d get the structure basically right. The song was there, complete and performable—but he didn’t stop there. He’d add little flourishes, bits of reggae or a fragment of something that sounded like Louie, Louie, or whatever, just pieces that would trigger associations in the average listener or add a surprising element of interest to the song and enhance the overall experience.

The Doof Warrior is Big Eyebrows. There is no functional reason for him to exist in the movie. He has no lines, performs no plot function, ties none of the structure together, has no character arc, and is basically just a piece of wallpaper. And yet, everything about the character exemplifies the batshit crazy vibe of the overall movie, and the movie would be lesser without him.

A big piece of this is because it is sold with complete conviction. There is no lampshading or winking at the audience—the actor, movie, and director are utterly committed. The guy bouncing around on the bungee cords and jamming out sludgy metal on his guitar gives it hell like he absolutely fucking means it, like, “I’ve got forty seconds in this movie, and I am going to make every last one of them count.” It’s ridiculous and over the top, but it’s played straight as something expected to be ridiculous and over the top in the context of the film, and it works gloriously.

Part of the selling it is that even the frigging eyebrows have eyebrows. The red onesie, for example—what the hell is with that? It’s deranged, but it totally works. And the guitar itself… Reportedly, the prop designer knocked together a quick guitar prop out of a bedpan and some guitar parts, and the director (George Miller) took one look at it and asked, “Where do you plug it in?” The fucking thing actually had to work. Oh, and towards the end, when we get a really good look at the guy, we see that, while he has mostly the same physical characteristics as the War Boys, he appears to have been born with no eyes. It’s a little detail, easily overlooked, but in context it implies a whole story about the guy.

My hat’s off to Miller on this one. Not only did he have this lunatic idea for a pajama-wearing, fire-shooting, flying freak guitar slinger to fire up the war party, but despite the fact that the part is miniscule in the context of a two-hour movie, he went all in on it. He had a vision, the Doof Warrior was a part of it, however minor, and he decided he was damn well going to do it right.