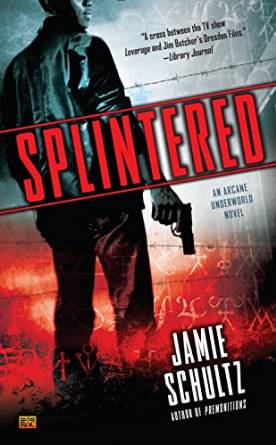 Anna Ruiz is on a mission: Help her friend and partner-in-crime Karyn Ames break free of the tangle of hallucinations and premonitions that have cut her off from reality. With the aid of her crew—ex-soldier Nail and sorcerer Genevieve—she’ll do whatever it takes to get Karyn help, even if it means tracking down every lowlife informant and back alley magic practitioner in the occult underworld of Los Angeles.

But since a magical heist went to hell, the crew has been working for crimelord and doomed magus Enoch Sobell. Between fighting Sobell’s battles with some seriously scary demonic forces and tangling with a group of violent fanatics who want to manipulate Karyn’s abilities for their own gains, Anna, Nail, and Genevieve are beginning to realize they’re in way over their heads.

And now that Karyn’s secret about seeing the future is out, even more unpleasant parties—human and otherwise—are about to come knocking…

It’s the kind of score Karyn Ames has always dreamed of—enough to set her crew up pretty well and, more important, enough to keep her safely stocked on a very rare, very expensive black market drug. Without it, Karyn hallucinates slices of the future until they totally overwhelm her, leaving her unable to distinguish the present from the mess of certainties and possibilities yet to come.

The client behind the heist is Enoch Sobell, a notorious crime lord with a reputation for being ruthless and exacting—and a purported practitioner of dark magic. Sobell is almost certainly condemned to Hell for a magically extended lifetime full of shady dealings. Once you’re in business with him, there’s no backing out.

Karyn and her associates are used to the supernatural and the occult, but their target is more than just the usual family heirloom or cursed necklace. It’s a piece of something larger. Something sinister.